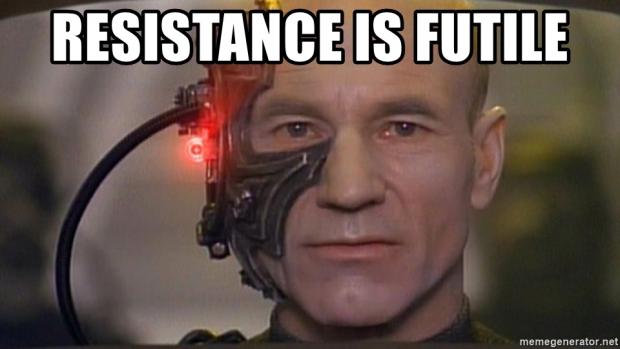 For those not in the know, the phrase "resistance is futile" was introduced to popular culture via "Q Who," a 1989 episode of Star Trek: The Next Generation in which the crew of the Enterpriseencounter the Borg, a collective of cyborgs connected to a hive mind via cybernetic implants. The Borg went on to become one of the most iconic antagonists of the Star Trek universe, but it wasn't their fiery passion or their over-the-top villainry that made them so chilling. Quite the contrary. It was their cold, calculating, machine-like intelligence and their singular aim of assimilating all new species into their collective that made the Borg so creepy.

The Borg weren't out to kill humanity, only to "add [humanity's] biological and technological distinctiveness to [the Borg's] own."

Now, you might not think this has much to do with our present predicament, and up until a week ago I would have agreed with you.

It turns out resistance isn't futile after all. Resistance is fertile. Discover the details about the real-life COVID Borg and how the people's resistance can alter their plans in this week's important edition of The Corbett Report Subscriber. Also, stick around for a Subscriber Exclusive video with James ruminating on nature, technology and disconnection.