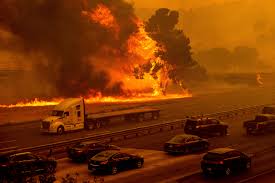 At least five people have died and two are missing after dozens of lightning-sparked California wildfires spread rapidly on Thursday, doubling in size in the state's wine country alone while expanding by nearly a third near Palo Alto.

There are now 26 major fire incidents in the state, the largest raging to the north and south of the San Francisco Bay Area and affecting more than 350,000 acres in total.

Up to 62,000 people have now been forced to flee as shocking satellite images show how smoke from the massive blaze has drifted 600 miles into the Pacific Ocean.

Five fatalities were reported as of Thursday night as Governor Gavin Newsom asked for help from other states in fighting the flames back. At least two people were missing and 33 civilians and firefighters have been injured.

Ten of thousands evacuating to safety are trying to do so as the coronavirus pandemic still rages through the state and thick smoke creates dangerous breathing conditions.

Locals have described being 'trapped' between the pandemic and the flames heading toward them. Up to 100,000 more people may be forced to leave their homes if the fires can not be pushed back soon.

California's air quality has become the worst in the world, according to CNN, having plummeted to 'very unhealthy' and 'hazardous' levels.

'We're in a pandemic and a heat wave, and we don't have air conditioning,' Kena Hudson, whose young son has asthma, told CNBC.

'We can't open up the window, we're trapped, we're hot and no one can come over to play'.