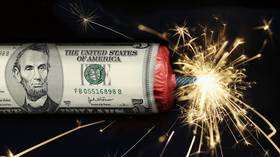 Schiff, who is CEO of Euro Pacific Capital, told the MoneyShow that more than 60 cents out of every dollar the government is spending is being printed. So, the Federal Reserve is printing more money for the government to spend than the US government is collecting in taxes.

"The myth is that the US economy was strong before Covid. It wasn't strong at all; it was the weakest it has ever been. It was the biggest bubble that has ever existed. That's why the economy imploded so quickly as a result of Covid-19 lockdowns. The air started coming out in the fourth quarter of 2018… And the dollar is being wiped out."

Schiff points out that "everything that the US government did in the aftermath of the 2008 financial crisis was a mistake." All of its monetary policy was wrong, all of its fiscal policy was wrong. "As a consequence, we never actually recovered from the crisis, which was caused by the Fed and the government. We simply made all the problems that caused that crisis worse."

America is about to experience inflation on an unprecedented scale, he says. The cost of living is going to skyrocket and it's going to happen very quickly. "It's going to hit people like a ton of bricks. And they are not going to see this coming."

1 Comments in Response to Endgame for America: Dollar literally a BOMB that could go off any day, warns Peter Schiff

This whole understanding is wrong. There might be some kind of "endgame," but it won't be what is expected. All the FED wiggling has to do with them trying to maintain absolute control. Here's what I mean. All bank loans to everybody including to the government, are not really loans. Rather, they are creations of new money. Repaying these non-loans over the years is simply gifting all repayment money to the FED. But, the FED must hold it in trust for the people (or their families). The way to get it back from the FED is to apply for it (I wish I knew where the application form was.). Since almost nobody ever applies for it back, the FED has all this money, which they invested over the years, and don't have a clue what to do with. If they just gave it back, things would balance, and the problem would go away. But then they would have a bigger problem. Credibility, and execution by angry people.