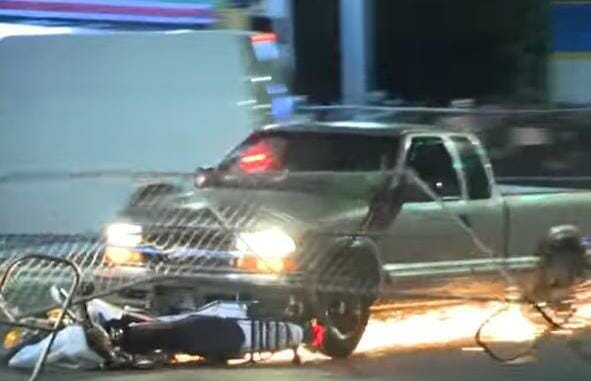 Portland Antifa and Black Lives Matter mercenaries attacked a truck driver, Jordan Hollingsworth, on August 5th. A video showed them blocking his vehicle, slashing his tires, breaking the windshield, and even throwing a motorcycle in front of him to make him stop. He dragged the motorcycle for 12 blocks and was chased by the militants until his truck would no longer run. He eventually got out of his truck and confronted the gang while holding a gun. The mob then stole paperwork from his vehicle with his address. Now they are harassing him at his home by breaking his windows and sending death threats. Now we hear that Hollingsworth may face criminal charges for defending himself. -GEG

On 5 August, Nationalist Review reported that the driver of a pickup truck was attacked by Portland rioters who, while entirely unprovoked, smashed his windows, slashed his tires, threatened him, wedged a bike beneath his undercarriage, and followed him on his retreat to his home after finding his address on documents he abandoned in his destroyed vehicle. At no point was the driver any threat to those engaging in the violent antics of that evening. But still, their attack against him didn't satisfy their desire for destruction.

But first, in case you missed our initial report, here's just one video taken that evening:

Watch what happened when a "protester" tried to block a truck in Portland. pic.twitter.com/IEPni52Ruo