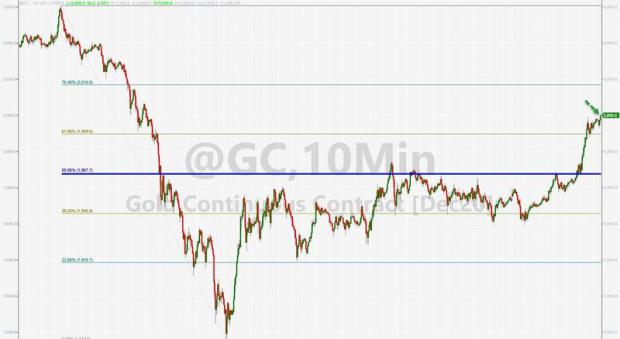 Last week was a tough one for gold and silver investors. Both metals saw significant corrections. This led some people to declare the gold bull market dead. But, as SchiffGold.com notes, historically, big corrections have been a normal feature of gold bull runs.

Last Tuesday, the price of gold dropped more than 5%, falling far below the $2,000 level. It was the worst single-day rout in seven years. Gold continued to fall in Asian trading Wednesday morning and briefly dropped below $1,900 before clawing back later in the session. Silver also had a precipitous fall, diving some 13%. A lot of people went into panic mode, but as Peter Schiff pointed out in his podcast the biggest daily moves in a gold bull market tend to be down.

1 Comments in Response to Gold Tops $2,000 Again As Dollar Dumps To 2-Year Lows

This is NOT rocket telemetry/astrophysics/brain surgery. The PRIVATELY-held "Feral" [NO]Reserve has been/continues "QE to infinity" shoveling out additional filthy lucre FIAT DEBT w/ abandon since the Sept, 2019 REPO "squeeze", and never since "resolved". The other major CB's - PBOC, BOJ, ECB doing the same. The on-going PLANdemic farce being the current "cover". The ultimate/final distraction before the current ponzi implosion occurs and covert final REAL asset consolidation/transfer being another big-ass WAR . . . as usual. Wash, rinse, recycle as usual.