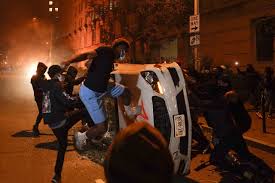 One city in the central part of the nation has isolated itself by raising drawbridges in an effort to quell the violence and destruction of ongoing riots. After a massive crime spreehe largest city in the nation looks like the setting of a dystopian movie.

The formerly prosperous nation has been rocked by disease, authoritarian measures, police corruption, and economic catastrophe throughout the summer. A hotly contested presidential race is spurring further division, and the level of violence is expected to increase as election day approaches.

It sounds like coverage of some distant, war-torn country. I remember when I was in college hearing daily coverage of the situation in Sarajevo and it sounded so far away that at some point, I stopped paying attention.

But now the war-torn country is ours.

The report above is about events currently taking place in Kalamazoo, Stone Mountain, Seattle, Chicago, and New York City.

And still, I see people saying, "It can't happen here." They say, "Our area is different."