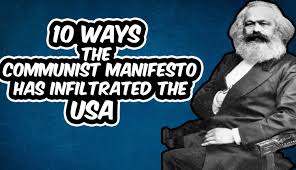 Socialists protesting in Portland are learning that "The worst thing that can happen to a socialist is to have his country ruled by socialists who are not his friends." -Ludwig von Mises

See, you might not realize it, but the USA is already heavily influenced by the socialist/ communist philosophy of Karl Marx.

Socialism is more of an umbrella term, meaning centralized control of the means of production– like factories and farming– in the hands of the state.

The two are related enough to use them interchangeably for our purposes.

Karl Marx was born over 200 years ago. And despite the utter failure of his communist philosophy in practice, the cult lives on. Still people want to try again… this time they will get it right.

Karl Marx and Friedrich Engels originally published The Communist Manifesto in 1848. It laid out the beliefs and action plan of the Communist Party. The goal was to get communists of every nationality to rise up and unite to overthrow their "capitalist oppressors."