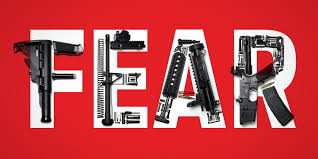 When the same poll was carried out in 2019, 64 percent of Americans said they supported stricter gun control. This means that 12 percent have changed their view in light of recent events. Meanwhile, 42 percent say they are opposed to additional gun control. The survey questioned 1,000 likely voters on August 5.

In addition, the poll showed that those Americans who already own guns are increasing their supply. A full 27 percent of Americans who owned guns have bought at least one more during the last six months.

That isn't surprising as 2020 has already been a banner year for the firearms industry. Sales continue to climb, especially among first-time gun buyers, and much of this is coming in response to the rioting being seen throughout the country and widespread calls to defund the police.

Firearms sales have already topped last year's figures thanks to uncertainty caused by the coronavirus pandemic. In some cases, they've outnumbered sales from the previous year by as much is 85 percent. The recent unrest has only fueled even more sales.

New gun owners accounting for a large percentage of sales

Statistics from the National Shooting Sports Foundation (NSSF) show that 40 percent of total sales are to new gun owners. In addition, women are accounting for 40 percent of first-time gun owners this year, and many of them are coming from states that lean to the left, like California.

The NSSF's Mark Olivia said: "You're seeing a reaction to people's concerns about being able to provide safety for themselves and the ones that they love."

The preferred firearm among panic buyers this year appears to be semi-automatic handguns, with shotguns coming in second place.