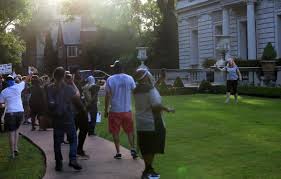 The screen shot from video (above), just as the gate is being opened by lead agitators of the mob of protestors. In this screen shot , the gate is about a foot open, likely no more than a half second after the latch was jimmied.

Christine Byers of KSDK in Missouri has uncovered evidence of prosecutorial misconduct by St. Louis Circuit Attorney Kim Gardner's office. Kim is one of the radical prosecutors who has been elected with money from George Soros linked radical leftist "Justice & Public Safety" political action committee.

Gardner has drawn national attention with her decision to prosecute a St Louis couple for defending their home against an angry mob of Black Lives Matter agitators.

The document obtained by 5 On Your Side (KDSK) show pressure was applied by Gardner's office to structure the police report, so as to alter the evidence to justify a warrant, and then, criminal charges.

Burgdorf was unwilling to sign onto a document he disagreed with, but finally signed off, after revisions, under the political pressure from Hinckley. Here are the findings by KDSK:

Hinckley also wrote the document the lead detective did sign, known as the probable cause statement. But it went through at least two revisions after Burgdorf outlined 14 concerns he had about the document, 5 On Your Side has learned.

•  Hinckley characterized the protest as "peaceful and organized" and that it was "calling attention to racial inequities in the criminal justice system." Burgdorf wrote that the evidence he gathered showed the protest was to call for the resignation of Mayor Lyda Krewson. The final document called it "a protest march."
•  Hinckley wrote that Patricia McCloskey was "armed with a semi-automatic handgun." Burgdorf wrote the phrase should read, "What appears to be a semi-automatic handgun." Hinckley responded, in part, "You cannot be serious with this one. Again, this is really problematic." Ultimately, the document read: "What was later determined to be a semi-automatic handgun."
•  Hinckley called Mark McCloskey's gun an "assault" rifle. Burgdorf called the word "assault" a propaganda term. Hinckley disagreed, but it was left out of the final document.
•  Hinckley wrote that the protesters passed through an "open gate" onto private property. Burgdorf said he didn't know whether the gate guarding the private street was open when protesters went through it, but that, at some point, it was damaged. Hinckley responded: "Your points here are really problematic. It seems to go beyond oversight and into purposeful ignorance. I suggest you very quickly re-assess this evidence." Ultimately the document Burgdorf signed reads, "protesters walked through a gate."
•  Hinckley wrote that Mark McCloskey's gun was "visibly loaded with an ammunition clip." Burgdorf wrote that he would have to verify that detail because it wasn't mentioned in his report or interviews with them. Hinckley wrote back "Seriously??!!" Ultimately, the document did not include the phrase Hinckley wrote.
•  Hinckley wrote that both victims, identified only by their initials, "feared that the defendant might fire her weapon due to her finger being on the trigger and her highly agitated demeanor." Burgdorf wrote that the term "angrily" was subjective and he didn't like it. Hinckley wrote, "It's a fact and an element of the offense." The final document did not include the word "angrily".