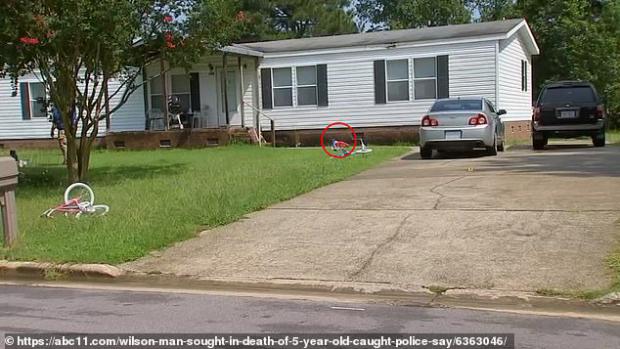 Darius Sessoms, 25, was taken into custody by Wilson police around 24 hours after he allegedly approached Cannon Hinnant in front of the young boy's father's house at 5:30pm and shot him in the head.

Sessoms lived next door to the family, and the killing is not believed to be random. Neighbors claim he had dinner with Hinnant's father Austin on Friday and had been over at the house earlier on Sunday.

The motive for the killing is still under investigation, but a GoFundMe established by a family member says that the young boy rode into Sessoms' yard.

'Sunday, August 9, 2020 a sweet soul named Cannon Hinnant was taken from this world over a senseless act,' it reads.

'A beautiful 5 year old baby boy riding his bicycle was shot by his neighbor point blank in Wilson NC. One minute he is enjoying his life, the next it all ends because he rode into his neighbors yard.'