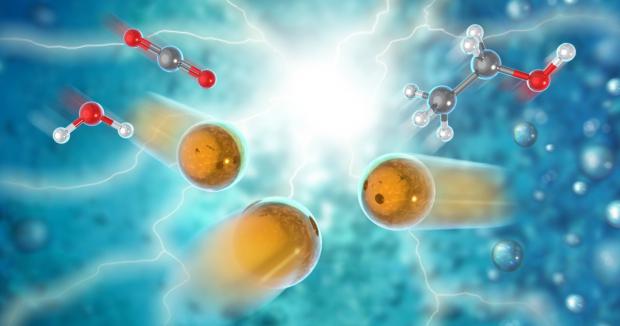 Researchers at the US Dept of Energy's Argonne National Laboratory, working with Northern Illinois University, have discovered a new catalyst that can convert carbon dioxide and water into ethanol with "very high energy efficiency, high selectivity for the desired final product and low cost."

The catalyst is made of atomically dispersed copper on a carbon-powder support, and acts as an electrocatalyst, sitting in a low voltage electric field as water and carbon dioxide are passed over it. The reaction breaks down these molecules, then selectively rearranges them into ethanol with an electrocatalytic selectivity, or "Faradaic efficiency", higher than 90%. The team says this is "much higher than any other reported process."

Once the ethanol is created, it can be used as a fuel additive, or as an intermediate product in the chemical, pharmaceutical and cosmetics industries. Using it as a fuel would be an example of a "circular carbon economy," in which CO2 recaptured from the atmosphere is effectively put back in as it's burned.

If the process is powered by renewable energy, which the researchers say it can be due to its low-temperature, low-pressure operation and easy responsiveness to intermittent power, then great; all you're losing is fresh water, which is its own issue.