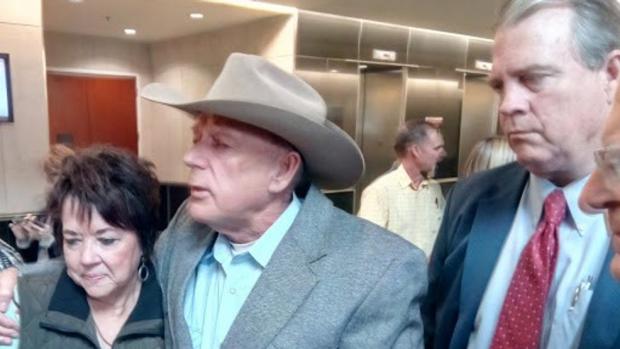 A U.S. appeals court refused Thursday to resurrect the criminal case against states' rights figure Cliven Bundy, family members and others stemming from a 2014 armed standoff with federal agents trying to round up Bundy cattle near the family ranch in Nevada.

The 9th U.S. Circuit Court of Appeal in San Francisco denied prosecutors' efforts to overturn U.S. District Judge Gloria Navarro's decision to stop a months-long trial in January 2018 for "flagrant" prosecutorial misconduct and her dismissal of the criminal indictment so it could not be re-filed.

"The judgment is affirmed," Judge Jay Bybee wrote for the three-judge panel that heard oral arguments May 29. The judges found Navarro properly identified violations of "recognized statutory or constitutional" rights, and she had the authority to punish the government "to deter future illegal conduct."

Bundy, his sons Ryan and Ammon Bundy, and Montana militia leader Ryan Payne had faced life in prison. But they were set free after nearly two years of detention ahead of trial on charges including conspiracy and assaulting federal officers.

Their arrests, with a total of 19 co-defendants in the Nevada case, came in early 2016 after the Bundy brothers and Payne took part in a 41-day anti-government protest occupation at the Malheur National Wildlife Refuge in Oregon.

The Nevada case stemmed from a years-long dispute between Bundy and the federal Bureau of Land Management over years of unpaid grazing fees. It grew to involve self-described personal militia members from 11 other states who answered a Bundy family plea for help in March 2014. It became a symbol for advocates of states' rights, anti-federal policies and the sovereign citizen movement.