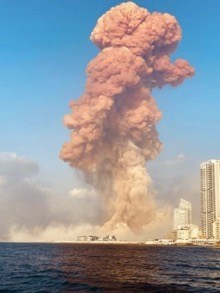 The weapon, which is not well known, caused considerable damage in the city, killing more than 100 people, injuring 5,000 and destroying many buildings. This time it will be difficult for Benjamin Netanyahu to deny it.

The first Israeli Prime Minister, Benjamin Netanyahu, authorized a strike against a Hezbollah arms depot using a new weapon that has been tested for seven months in Syria. It is not known whether the second Prime Minister, Benny Gantz, gave his consent.

The strike was carried out on August 4, 2020, at the exact location designated by Benjamin Netanyahu in his speech to the United Nations on September 27, 2018 [1].

It is not known what weapon was used. However, it has already been tested in Syria since January 2020. It is a missile with a tactical nuclear component in its warhead that causes a smoke mushroom characteristic of nuclear weapons. It is obviously not an atomic bomb in the strategic sense.

The weapon was tested in Syria on a plain in the countryside and then in the Persian Gulf on the water against Iranian military vessels. This is the first time it has been used in an urban environment, in a particular environment that made the air blast and vibrations reflect off the water and the mountains. Far from destroying only the port of Beirut, it killed about a hundred people, injured at least 5,000 others, and largely destroyed the eastern part of the city (the western part was largely protected by the grain silo).