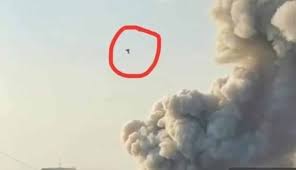 To note, on the smaller explosion, providing this is a confirmed Israeli missile strike (not investigated by VT), then either it was a massive conventional weapon that could only have been carried by a "heavy lift" space launch system (equiv. Saturn V) or was "something else."  Note, VT is NOT responsible for the non-Beirut video.

A few minutes ago, it was announced that the radiation monitoring site used by the IAEA that detected the nuclear attack had, in actuality, been malfunctioning and that the report we received, from the IAEA was "no longer valid."

What is it Jim says…"You just can't make this stuff up?"

Beirut isn't built on sand, its built on rock.   Today, there is a 593 foot wide crater through the solid rock of Beirut's port. Nothing can do that, almost nothing.

Even a standard nuke won't do this kind of damage.  12000 tons of ammonium nitrate wouldn't have done it as well but, when making up a story, someone forgot to ask demolition/explosive/physics experts.

We recommend that curious readers take advantage of the wealth of material on nuclear test craters rather than take our word for it.