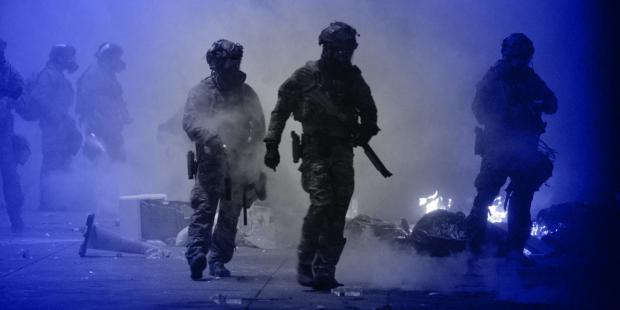 But an internal DHS document obtained by The Washington Post shows the department did have access to protesters' electronic messages and that their conversations were written up in an "intelligence report" that was disseminated to federal law enforcement agencies, including the FBI, as well as state and local governments.

In a letter sent Friday, Democratic members of the Senate Intelligence Committee asked Brian Murphy, acting DHS undersecretary for intelligence and analysis, about statements he made to committee staff on July 23 regarding the department's intelligence activities in Portland.

"You stated that I & A [the intelligence and analysis office] had neither collected nor exploited or analyzed information obtained from the devices or accounts of protesters or detainees. Please confirm," the senators wrote.

A DHS Open Source Intelligence Report dated six days before Murphy's briefing to the committee shows that the I & A office analyzed messages that protesters exchanged on the Telegram messaging app. They discussed which routes to take during marches and how to avoid the police.

The report describes the messages as "likely Portland-based encrypted messaging app users discuss TTPs [tactics, techniques and procedures] to evade law enforcement when being pursued." It also states that the information came from "a Telegram chat room," which it described as "an instant messaging service."

Holding the World to Ransom

This Is Their Biggest Fear | David Icke