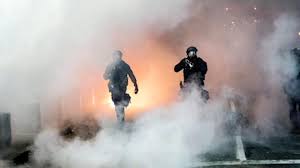 Portland and Seattle, for instance, seemed willing to give rioters a free hand before belatedly stepping in. And of course there's the amazing quote from Chris Cuomo, the brother of New York's Governor :

"Please, show me where it says protesters are supposed to be polite and peaceful."

The worst-run cities will pay a huge price for this indecision when rioters finally leave but shoppers and merchants don't come back.

But like most things in this increasingly messy world, the big-city mayor story is way more complicated (and maybe more sympathetic) than it seems at first glance.

Let's take it in stages.

Many US cities were already headed for bankruptcy

It's easy to forget that less than a year ago – when the national economy seemed pretty strong and people were borrowing and spending with abandon – the unfunded liabilities of Chicago, Los Angeles, New York and a long list of other venerable cities were already out of control and threatening those governments' solvency.