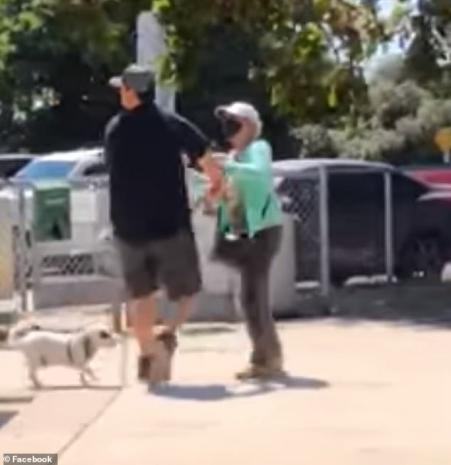 An irate woman reportedly maced a couple in a California dog park because they weren't wearing face masks while they enjoyed a picnic lunch together.

Footage taken by a concerned witness begins halfway through the confrontation and shows the woman, wearing a black face mask, deploying pepper spray at Kelley.

The woman soon stops and is confronted by witnesses, while Kelley is temporarily blinded by the pepper spray.

'What is your problem? You just maced him!' one female witness says. A man beside her chimes in 'That's just wrong!'

'You just maced them and their food because you disagree,' the female witness adds.

The unidentified woman and her dog then quickly leave the park without another word.