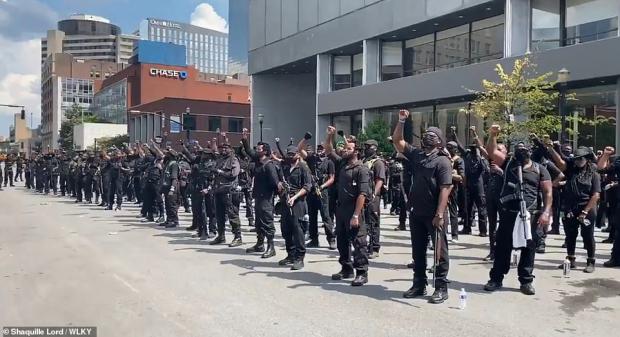 Three people were injured in downtown Louisville when a member of an armed black militia group carrying semiautomatic weapons accidentally discharged a firearm as they marched to a demonstration.

Despite earlier reports that the shots were fired as a result of an argument between the group and a far-right organization gathered nearby, it was later confirmed that a member of the Atlanta-based 'Not F*****g Around Coaltion' (NFAC) had accidentally fired on other members as they assembled in Baxter Park.

An estimated 350 armed members of the group had gathered there before marching toward the main protest site in downtown Louisville, where about 50 member of the far right militia group Three Percenters were also gathered.

Just hours after the shooting, the leader of the NFAC vowed the group would return to Louisville to 'burn this motherf****r down' if the investigation into the death of Breonna Taylor is not completed in four weeks time.

John 'Grandmaster Jay' Johnson delivered a fiery speech from the steps of the Metro Hall on Saturday afternoon as he called the group to take action if 'the truth' about Taylor's death was not released.

He accused the investigation of looking to rework the crime scene to cover up what happened to the 26-year-old EMT, who died by police fire following a no-knock raid on her apartment on March 13.

Following his speech, the members of the armed group were called on the take an oath that they would protect black lives and to take action if Johnson's ultimatum was not met.