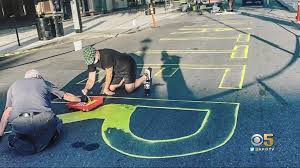 The city removed the mural after a local lawyer said she should be able to paint "MAGA 2020" on the same street, the report said.

Officials said they removed the mural because it was a traffic hazard, CBS San Francisco reported.

Dan Pease, who painted the mural, told the outlet that he'd expected it to wash away over time.

A California city removed its Black Lives Matter mural in the middle of the night last week after a local lawyer asked whether she could install one nearby in support of President Donald Trump's reelection bid.

CBS San Francisco reported on Sunday that a Redwood City resident, Dan Pease, asked city officials earlier in July if he could paint "Black Live Matter" on a street downtown as part of an Independence Day public-art celebration. Officials agreed and provided him with yellow poster-board paint he used to paint the 17-foot mural.