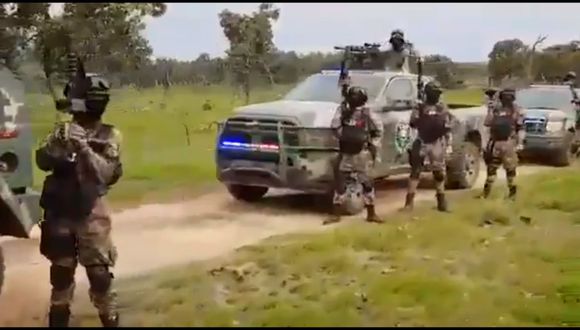 Terrifying footage shows dozens of uniformed gunmen posing with military-grade weapons near armored pickup trucks emblazoned with the initials of the Jalisco drug cartel in Mexico as the country's top security officials launch an investigation into the video.

In what appears to be a show of power, several dozen masked men are heard shouting they are 'people of Mencho,' a nickname used by Jalisco New Generation Cartel boss Nemesio Oseguera.

Almost all of the uniformed men wearing bulletproof vests wield assault rifles, and some appear to have belt-fed machine guns or .50 caliber sniper rifles.

Many of the trucks in a column of about 20 vehicles parked on a dirt road have improvised gun turrets or plate-steel armor welded onto them.

Mexico's top security official, Alfonso Durazo, wrote Saturday that the video is being analyzed to confirm whether it is authentic and when it was made.

Durazo wrote in his Twitter account that 'there is no criminal group that has the capacity to successfully defy federal security forces, and much less with this staged event'.