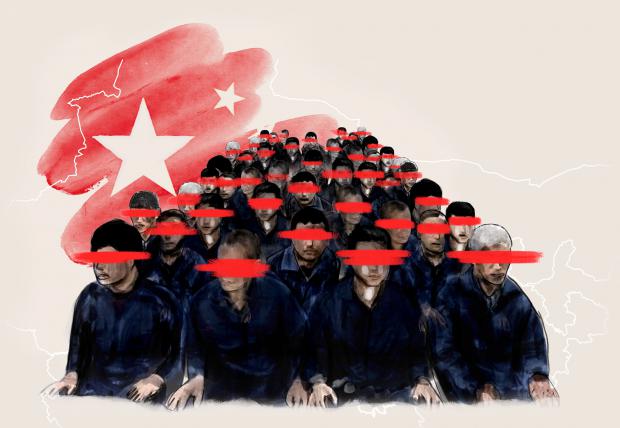 China's ambassador to the UK today insisted Uighur Muslims live in 'peace and harmony' despite being confronted with video appearing to show shackled prisoners being herded onto trains.

Appearing on the Andrew Marr Show, Liu Xiaoming denied reports that China is carrying out a programme of sterilisation of Uighur women in the western Xinjiang region.

Reports have accused China of attempting to reduce the Uighur population through forced sterilisation, but Mr Liu insisted this is not 'Government policy.'

Experts estimate that more than one million Uighurs and other minorities have been rounded up into a network of internment camps in total.

But Mr Liu suggested video footage, believed to be from Xinjiang, showing men, kneeling and blindfolded waiting to be led onto trains was 'fake'.

He added the images could be 'transfers of prisoners,' as he insisted 'I don't know where you got this video tape from.'

'There is no so-called massive forced sterilisation among Uighur people in China,' he said. 'It is totally against the truth.'

However, Mr Liu admitted he couldn't 'rule out single cases for any country,' adding: 'There is no such concentration camp in Xinjiang.'