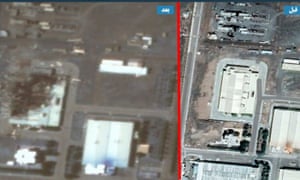 Citing no injuries during the large explosion, it occurred at a power station in the city of Islamabad, which is in the central province of Isfahan.

At this point, the spate of 'mystery' blasts and fires which has damaged key military, nuclear, and industrial sites across Iran - especially in and around Tehran - is approaching a dozen in only the past month

Like with many of the prior incidents, many of which were deadly, Iranian officials downplayed that it was potentially Israeli or US-backed sabotage on its facilities, saying it was likely caused by the erosion of a transformer.

Separately on Sunday, cellophane factory in northwest Iran erupted in fire. Video and images showed a huge cloud of smoke billowing from the site through the day as firefighters struggled to put it out.

Iran's civil defense organization chief, Ghulam Reza Jalali, was cited in state media as saying Iran is not ruling out sabotage on the power plant either by internal opposition groups or externally supported entities.

To review, all of this comes after earlier this month an advanced centrifuge assembly plant at Iran's Natanz nuclear site was destroyed in a mysterious fire which is increasingly being blamed on Israeli or US intelligence:

A former official suggested the blaze could have been an attempt to sabotage work at the plant, which has been involved in activities that breach an international nuclear deal.

On 26 June, an explosion occurred east of Tehran near the Parchin military and weapons development base that the authorities said was caused by a leak in a gas storage facility in an area outside the base.