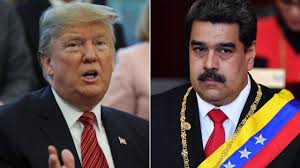 President Trump on Friday signaled the US is indeed about to "move" on Venezuela and its sanctions thwarting activities with the help of 'rogue states' like Iran. He told the Spanish-language American channel Noticias Telemundo on Friday that—

"Something will be happening with Venezuela" and that the United States will "be very much involved."

The president was also asked about the future of election in the country, especially related to US-backed opposition leader and self-styled 'Interim President' Juan Guaido.

Trump said the US would "take care of the people of Venezuela" and ultimately support whoever was legitimately elected. But of course, it remains that the US deems any support to Nicolas Maduro by definition "illegitimate".

The interviewer, Jose Diaz-Balart, asked Trump point-blank: "For you, Venezuela, is it Guaido, is it Maduro, is it U.S. intervention?"