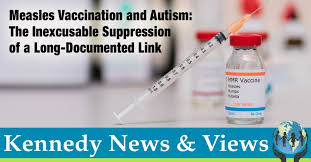 In fact, measles has provided public health officials with recurrent opportunities to fine-tune the CDC's strategic "recipe" for fostering high vaccine demand: stir up "concern, anxiety, and worry" about disease; promote vaccination frequently and visibly; and craft dumbed-down messages that, above all, avoid troublesome "nuance."

In this regard, parental reports linking autism spectrum disorder (ASD) to measles-mumps-rubella (MMR) vaccination have long been a thorn in officialdom's side, giving rise to the aggressive and unnuanced media mantra that the MMR "does not cause autism." Through constant repetition, many members of the public continue to swallow this official dogma, but the reality is that biological evidence on the ground has—from the beginning—told a very different story. The Institute of Medicine (IOM) even admitted as much in 2001 when it stated that it could neither disprove "proposed biological models linking MMR vaccine to ASD" nor dismiss the "possibility that MMR vaccine could contribute to ASD in a small number of children."

Among the biological models developed to explain autism, one particularly fruitful area of research has focused on ASD and immune dysregulation. Researchers have pointed to "autoantibodies"—immune proteins that react with the body's own cells, tissues or organs instead of fighting external pathogens—as key indicators of an immune system that has lost its ability to differentiate between "self" and "non-self." Autoantibodies are the hallmark of autoimmune disease and, in autism, they tend to react with proteins expressed in the brain. In a surprisingly candid systematic review of the autoantibody literature just published in Research in Autism Spectrum Disorders, authors from Harvard and other American universities cite long-standing evidence that viral vaccines—and explicitly the MMR—are one of the culprits capable of knocking the immune system off its game.