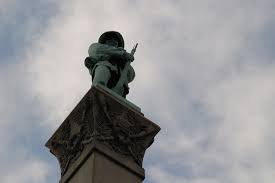 Unlike other more 'controversial' Lincoln statues that portray him breaking the chains of slavery, this one simply shows Lincoln sitting in a chair.

But it's offensive, say the students. And they want it removed.

As I wrote to you a few weeks ago– nearly EVERY American historical figure, including Lincoln, George Washington, Benjamin Franklin, all the way down to Amerigo Vespucci (for whom the American continents are named) was either a slave owner or a white supremacist.

Lincoln told the audience during a Presidential debate in 1858, for example, "I am in favor of the race to which I belong having the superior position."

Clearly such a view does not express our modern sentiments.

According to one especially erudite student leader, "I just think [Lincoln] did, you know, some good things…the bad things that he's done definitely outweighs them. . ."

And poof, judgment has been rendered: Lincoln's flaws outweigh his achievements. So let it be written.