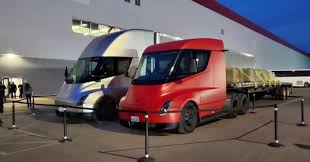 More recent sightings of the Tesla Semi out in public have revealed that the truck now uses just two Superchargers to juice up. More interestingly, these are two 150 kW V2 Superchargers rather than the new, more powerful V3 units.

As you can see, it was the red Tesla Semi carrying cars for end-of-quarter deliveries. The truck was spotted at the Rocklin Supercharger in California, which is not too far from Sacramento.