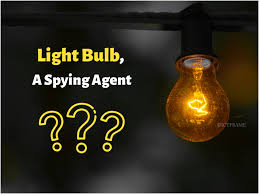 With the introduction of smart lighting and smart devices, many people were worried that hackers could spy on them or get information when they are inside their homes. However, a recent study has astonished many people when it claimed that hackers can also spy on you using just normal electric bulbs.

This recent research has been published by cybersecurity experts who discovered an unusual way of using ordinary light bulbs to eavesdrop on conversations. This was done by the researchers from Israel who had placed themselves in a position where they could spot the bulb hanging from the ceiling. The new technique has been called the "Lamphone Attack".

According to this technique, a person can eavesdrop on a conversation from around 82 feet or 25 meters away, if a light bulb is hanging near the conversation spot. One can detect the vibration of the bulb, which is produced due to the air pressure fluctuations during the conversation, that is, the traveling sound waves. When the sound wave hits the walls of the room, it bounces back and produces small vibrations that can be picked up by electro-optical sensors if it is focused on the bulb.

Of course, for the Lamphone Attack to be a success, an elaborate setup is necessary. You would require a telescope to get a close view of the room and the bulb. The electro-optical sensor is to be mounted on the telescope so that it can convert the light energy to electrical energy. Then, you would require an analog-to-digital converter that will convert the sensor output to a digital signal. Finally, you need a laptop to process the optical signals, and then, bring out the sound.

According to the researcher, just by using this technique, sounds can be captured from the room. There is no need for elaborate hacking.

This method, according to scientists, can also be used to identify songs correctly by the use of apps like Shazam. They were able to find positive results when they tried it out with the songs 'Let It Be' by the Beatles and 'Clocks' by Coldplay.

The Lamphone Attack has been referred to as the side-channel attack, which is a method in which hacking is done of a cryptographic algorithm, but it is based on supplementary systems analyses. It relies on indirect data for hacking. Other such methods have been suggested, like sound waves bouncing from windows, but this method shows the most promise.

There are a few limitations, though. Firstly, the bulb has to be directly in sight. A curtain or lampshade will fail the data collection. And of course, the conversation should be taking place in the same room where the bulb is located.