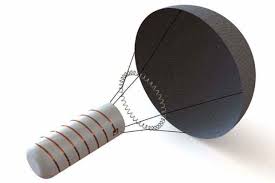 Dubbed "Specter", the non-lethal projectile can be fired from a shotgun and downs targets using a taser-like electric shock.

The weapon is the brainchild of Colorado-based tech research firm Harkind Dynamics and is part-funded by the US Department of Defense, New Scientist reports.

The makers of Specter (Small arms Pulsed Electronic Tetanization at Extended Range) say it can be fired from any 12-gauge shotgun.

It's designed to incapacitate targets rather than kill them, with a range of up to 330 feet (100 metres) – roughly the length of a football pitch.

For comparison, the average range of a taser is roughly 25 feet (7.6 metres).

To avoid causing serious injury, the projectile deploys a parachute right before it hits an enemy to slow it down before impact.

According to Harkind Dynamics, the parachute halves the speed of the projectile.

Within a metre of its target, Spectre releases three electrode darts that can penetrate clothes and skin.