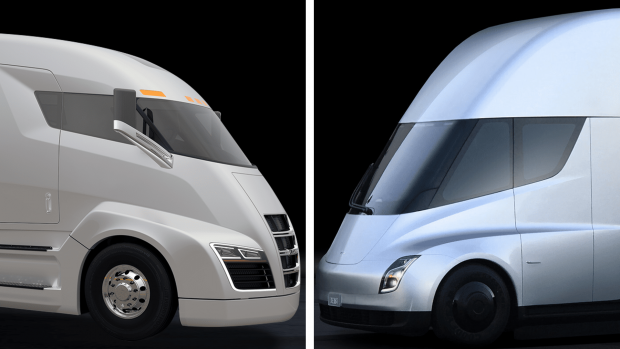 Semi-trucks might not be the sexiest of vehicles but they represent a key market for cleaner transport. For carbon emissions to drop worldwide, semi-trucks will be crucial. Recently, there's been a lot of media buzz about the Tesla Semi and Nikola One. Yet these two Semi-trucks are entering the segment with two completely different implementations. Tesla is all-electric while Nikola is choosing the more controversial hydrogen fuel cell route. So which will be better?

Similar to most Class 8 trucks, both the One and Semi will be able to tow up to 80,000 lbs. Nikola claims that their Semi will hit 60 mph in 30 seconds, whereas Tesla states their Semi will do it in just 20 seconds. Nikola is promising a range of between 500-750 miles (this means, however, refueling at non-existent hydrogen stations). Meanwhile, Tesla will have two different versions of their Semi, one with a range of 300 miles and another with a range 500 miles.