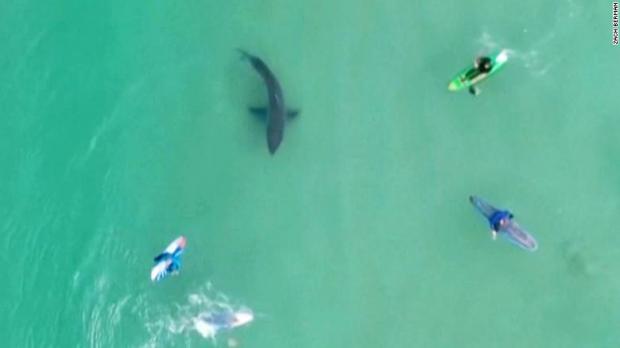 THIS chilling footage shows a great white shark prowling just feet away from six oblivious surfers as they wait to catch a wave.

The drone footage, filmed by a local teenager, shows the fearsome predator cruising amongst the group of friends in Plettenberg Bay, South Africa.

The great white goes undetected by the group for 25 seconds, edging closer to its potential prey.

It is only when the kayaker spots the shark's fin breaking the surface of the water that the group realise the danger they are in.

The kayaker warns his surfer pal whose legs are just a couple of feet from the jaws of the great white.

In a bid to save his friend from a terrifying attack, the kayaker pushes his canoe forward distracting the shark long enough for them both to make an escape.

The great white breaks away from the group allowing them to head back to the safety of the shore.

Nature enthusiast Zachary from Cape Town was on the beach with his father using his drone when he captured the chilling footage.