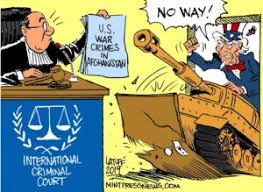 In the near-two decades since the International Criminal Court was set up to try the worst violations of international human rights law, it has faced harsh criticism for its highly selective approach to the question of who should be put on trial.

Created in 2002, the court, it was imagined, would act as a deterrent against the erosion of an international order designed to prevent a repetition of the atrocities of the Second World War.

The Hague war crimes court will long be remembered for that amazing scene when Serbian patriot, Slobodan Praljak, hauled up before the court on fake charges of war crimes, told them on the stand that he was innocent, that he rejected their charges with great contempt, and then slugged back a vial of poison, and died on the spot. An honorable death.

Such hopes did not survive long.

The court, which sits in The Hague in the Netherlands, almost immediately faced a difficult test: whether it dared to confront the world's leading superpower, the United States, as it launched a "war on terror".