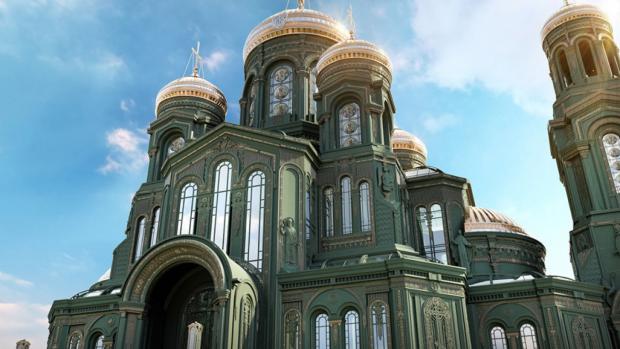 At a moment that monuments in the West from statues of Thomas Jefferson to George Washington to Winston Churchill to Confederate generals like Robert E. Lee to various war memorials are being torn down, a new unprecedented in size memorial has gone up in Russia on the occasion of the country celebrating its 75th anniversary 'Victory Day' which commemorates the surrender of Nazi Germany in 1945.

A massive traditional Red Square Victory Day parade is set for June 24th, postponed from its original May 9 date due to the coronavirus pandemic. To help mark the occasion, Russia officially opened a towering military-themed cathedral.

The Russian Orthodox Church and armed forces unveiled the newly constructed 'Cathedral of the Armed Forces' some forty miles outside Moscow early this week. It is also formally called Cathedral of the Resurrection of Christ, and is now considered one of the tallest churches in Russia.

It specifically features symbols which celebrate the Soviet fight against the Nazi invaders, which most estimates say resulted in 26 million total Russian troops and citizens killed.

One journalist described that the new cathedral's design and aesthetics are "like a glimpse of an alien civilization".