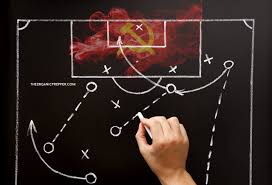 While it might seem like everything that is happening is just chaotically bouncing from one shocking event to the next, that assessment couldn't be further from the truth. There's a playbook – a literal playbook – and we're being manipulated toward the endgame that does not benefit the American people.

It's widespread guerrilla actions and the destabilization of our country.

The playbook I'm referring to in this article is the US Special Forces Unconventional Warfare Manual from 2010. These were methods that the United States military employed against Libya.

The intent of U.S. UW efforts is to exploit a hostile power's political, military, economic, and psychological vulnerabilities by developing and sustaining resistance forces to accomplish U.S. strategic objectives. Historically, the military concept for the employment of UW was primarily in support of resistance movements during general-war scenarios. While this concept remains valid, the operational environment since the end of World War II has increasingly required U.S. forces to conduct UW in scenarios short of general war (limited war).

Enabling a resistance movement or insurgency entails the development of an underground and guerrilla forces, as well as supporting auxiliaries for each of these elements. Resistance movements or insurgencies always have an underground element. The armed component of these groups is the guerrilla force and is only present if the resistance transitions to conflict. The combined effects of two interrelated lines of effort largely generate the end result of a UW campaign. The efforts are armed conflict and subversion. Forces conduct armed conflict, normally in the form of guerrilla warfare, against the security apparatus of the host nation (HN) or occupying military. Conflict also includes operations that attack and degrade enemy morale, organizational cohesion, and operational effectiveness and separate the enemy from the population. Over time, these attacks degrade the ability of the HN or occupying military to project military power and exert control over the population. Subversion undermines the power of the government or occupying element by portraying it as incapable of effective governance to the population. (source)

And now this guideline is very clearly being used against the United States. It started years back, but recently, we've watched things escalate rather dramatically.

Consider this a pyramid that begins at the bottom and builds to the apex. This all begins with underground activities and the fanning of legitimate flames, like Selco mentioned in his article about defunding the police.