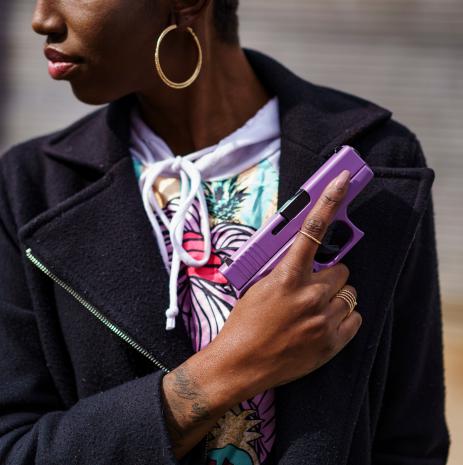 Iesha Williams wants her son, Cayden, to learn how to shoot and safely handle a gun when he turns 10.

The 29-year-old single mom from Minneapolis shares a love of basketball with her 8-year-old, who, in turn, tries to teach her how to play Fortnite at home. But with the specter of George Floyd's killing by local police hanging over them—like so many families of color in America—she can't help but look ahead to a more primordial kind of training.

"I'm a single mom with a son, and I'm also small, so I want to make sure I'm protecting my son, and we're also saving ourselves," she told The Daily Beast.

Williams has never shot a gun, but she's been thinking about learning how to use one for years. She just discovered the opportunity to apply for a permit—and receive lessons—a few days ago, when a friend introduced her to the Twin Cities Chapter of the National African American Gun Association (NAAGA). Williams, who joined through a special initiative of the chapter to pay the enrollment fees for single mothers, is part of the quiet explosion in the number of black gun owners nationwide. In 2014, 19 percent of black households had a gun owner, according to a study by the Pew Research Center. By 2017 (the latest data available) that number had grown to 24 percent. And NAGA estimates the percentage may now be even higher, considering the organization's membership numbers this year: NAAGA, which started with one chapter in Atlanta in 2015, now has more than 100 chapters nationwide with 40,000 members. More than 10,000 of them, like Williams, joined this year, according to the group.

The growth parallels a 55 percent increase in the number of white nationalist groups since 2017, according to the Southern Poverty Law Center. The group also reported, citing FBI data, that "27 percent of all hate crimes in 2018—the largest share among all categories—were motivated by anti-black bias."

African-American gun usage as a form of protection against racial violence is not new and, in fact, is as old as slave rebellions. But the latest deluge of evidence of killings of people of color—by police, by those connected to police, by random white people—have lent the cause even greater urgency.