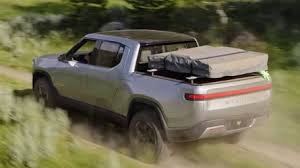 One of the vehicles is pretty clear, but no one's quite sure how to identify the other.

RivianOwnersForum.com revealed the news this week that Rivian has filed trademark applications for the R1V and R2X. It seems pretty clear that the R1V will be the name for the company's upcoming all-electric van. However, details aren't clear about the mystery 'X' vehicle.

Rivian's first vehicles will be the R1T and R1S, which have already been announced and are on the road in prototype form. Obviously, the 'T' designates its electric pickup truck, while the 'S' is used to specify the SUV.

Rivian has already announced that it will supply electric delivery vans for Amazon. The online retailer is one of several companies that have already invested in Rivian. It's highly likely that the R1V will be some sort of van, or the name for a lineup of vans. It could be the Amazon delivery van, specifically, or perhaps a passenger van for consumers. Maybe both?

So what might R2X stand for? The forum says it may be a smaller consumer vehicle that Rivian has yet to announce. Scaringe has briefly mentioned such a car in the past.

Since no official vehicle class is designated with an 'X', it makes this a mystery. Rivian could be using the X on purpose, to assure that the vehicle's identity remains ambiguous. However, there's arguably more reason to use the X to stand for something more obvious, as the company has already done with its other vehicles.