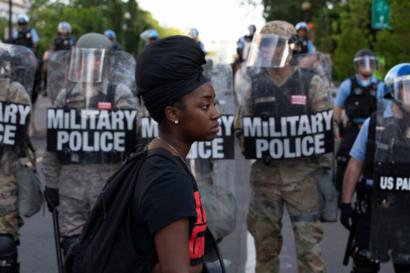 As protests over the death of George Floyd intensify across the United States, many police officers aren't confronting the crowds in their regular blue or black uniforms. Instead, their attire comes off as far more aggressive.

In Minneapolis on Saturday, state police wielded batons and wore helmets with face shields, knee-high boots, and external bulletproof vests. That same evening in Seattle, Washington, members of the King's County Sheriff's department patrolled the city in green fatigues, shoulder and knee pads, and what appeared to be gas masks. Similar scenes have played out across the country.

"It looks like a war zone when police officers are wearing dark battle dress uniforms, and they're joined by the National Guard wearing camo, carrying M14 and M16 rifles," says Michael Birzer, professor at the school of criminal justice at Wichita State University, and a former police officer. "The police want to project a show of force and one way you do it is just by your sheer presence in uniform." At a time when distrust of the police is rampant, particularly among black people, these uniforms further strain officers' relationship with the communities they're supposed to protect.

THE PSYCHOLOGICAL IMPACT OF MILITARY UNIFORMS

Police uniforms aren't just utilitarian garments; criminal justice scholars say they're also designed to project symbolic power. Birzer points out that the original navy blue police uniform was designed to give the impression of safety and competence, whereas combat uniforms signal the potential for violence. Several studies have found that citizens perceive police officers clad in traditional black or blue as friendlier and more honest than those wearing military-style fatigues that are green or camouflage.