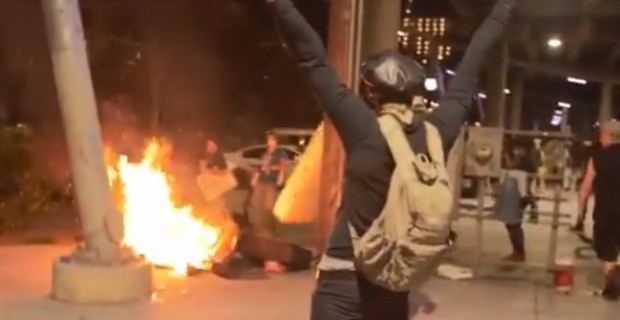 Following an incident in Austin where a homeless veteran's mattress was set on fire by Antifa rioters, leftists falsely claimed an Infowars film crew filming the scene were responsible for the attack.

Video footage shows the homeless man's belongings on fire as he desperately tries to put it out while rioters scream in celebration.

"I live here, what the fuck are you doing?" the homeless man yells at Infowars crew.

Despite the fact that the fire was started by Antifa rioters, 'Infowars' began trending on Twitter due to completely false claims that its film crew started the blaze.

The source of the false claim came from a Twitter user called Eldon Katz, who describes himself as an "anti-fascist," "anti-capitalist."

"An InfoWars crew here in Austin set fire to a homeless man's belongings and shared their despicable act through various social media accounts in an effort to demonize protestors, who I know for a fact would never do this," claimed Katz.