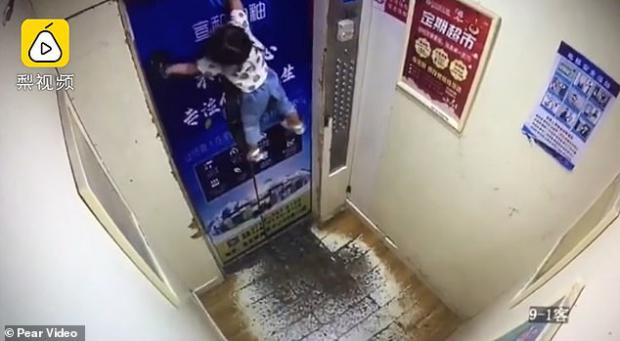 A toddler in China has been rescued unhurt after being dragged up the doors of a descending lift by a safety leash attached to her wrist.

The two-year-old girl was standing in the elevator by herself with her caregiver standing on the other side when the doors suddenly closed, and the machine began to go down.

Shocking surveillance footage released by local media shows the child being yanked from the lift's floor and dragged towards the ceiling by the arm before getting stuck in mid-air dangerously for several minutes.

The girl's unusual movement activated the lift's emergency system, which stopped it from descending.

The elevator then automatically went up, allowing the girl to gain balance and get back on her feet again.

The girl was said to be out with a woman who was looking after three children.

The two other children included a five-year-old who was also bound to a wrist link.