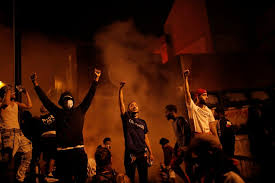 Derek Chauvin, the officer seen on a bystander's cellphone video kneeling on George Floyd's neck on Monday before the 46-year-old man died, has been charged with third-degree murder and manslaughter, Hennepin County Attorney Mike Freeman told a news briefing.

"He is in custody and has been charged with murder," Freeman said of Chauvin. "We have evidence, we have the citizen's camera's video, the horrible, horrific, terrible thing we have all seen over and over again, we have the officer's body-worn camera, we have statements from some witnesses."

The cellphone footage showed Floyd repeatedly moaning and gasping while he pleaded to Chauvin, "Please, I can't breathe." After several minutes, Floyd gradually grows quiet and ceases to move.

Chauvin had his knee on Floyd's neck for 8 minutes and 46 seconds, and an autopsy found the combined impact of his being restrained by the police, underlying health conditions and any potential intoxicants in his system likely contributed to his death, according to the charging document.