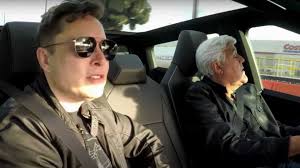 The newest season of Jay Leno's Garage has started on May 20, 2020 and if you've been keeping updated with the beat, one of the cars that will be featured on the show is the Tesla Cybertruck. We've seen its teaser video before, which showcased the Corvette Convertible along with the electric truck.

CNBC Prime isn't done with the teasing, though. A new teaser video came out (embedded on top) showing Leno driving Musk around in the Cybertruck show car while talking about the controversially-designed vehicle, of course.

The video's a little out of sync, though, but if you'll listen to the conversation, Musk has confirmed that the Cybertruck's production version will have a major deviation, so bear with it if you will.

When asked what will be changed in the production-spec, Musk said that they may have made the show car a bit bigger than what's intended. The real thing will be smaller by five percent, although Musk has confirmed that the proportions will be the same. This kind of contradicts with Musk's tweet before, saying that the Cybertruck's width will be closer to 82 inches instead of 80 inches. But then again, we'll never know the actual measurement until the production version becomes a reality, so let's take this with a sprinkle of salt.