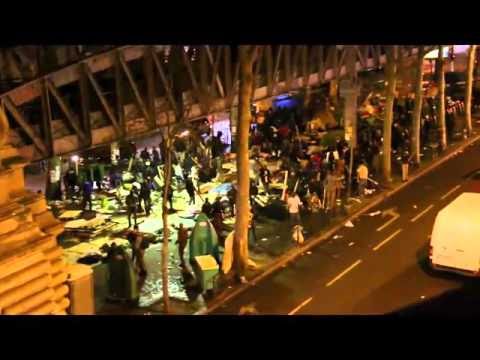 Migrants angry over the death of a teen motorcyclist rioted for a fourth consecutive night in Paris.

The disorder started after 18-year-old Sabri Choubi was killed after ramming into a pole while not wearing a helmet on the northern outskirts of Paris on Saturday evening.

Despite little evidence of police involvement in the accident, migrants in the Paris suburb of Argenteuil blamed them anyway and have engaged in violent unrest on every night since.

The migrants, described as "protesters" by some media outlets, once again threw fireworks at police and set street fires as authorities tried to conduct stop and search operations.

Disorder also spread to the nearby neighborhood of Bezons. Dozens have been arrested since the violence began.

Police continue to assert that they had nothing to do with Choubi's death and that a police car was not even in the area when he was killed.

A procession in honor of Choubi is set to take place today, with the teen's father calling for calm.

Migrants in Paris and numerous other areas of France also rioted after the death of another motorcyclist last month.

Unrest in Paris' notorious high crime banlieues is commonplace and a clear sign that multiculturalism has failed, although the media has repeatedly tried to frame the very existence of no-go zones as a conspiracy theory.