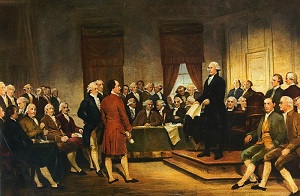 Their ire is directed toward officials, not the governmental structure that such officials manage. They are satisfied with how the federal government is structured and just want "better people" managing it.

But there were problems with the Articles, such as trade wars between the states. To fix these problems, the states sent delegates to the Constitutional Convention in Philadelphia. The purpose of the convention was simply to revise the Articles.

2 Comments in Response to Early Americans Would Have Rejected the U.S. Government

I would think it is highly doubtful that our founders would like how the states operate now a days either.

The answer is quite simple. The 12-person jury has been around for long before the formation of even the first United States of America (Articles of Confederation). The answer is, for any law to become effective for any locality, it hast to be approved by a local jury - many juries across the land. If the Federal and State governments can't get people to consider any law via jury, drop the proposed law. Also, if people, after experiencing a particular law, decide that they want to remove or modify any law by jury, they can do it any time, and as many times as they want for modification. This is basic. There would have to be some thinking going into this to make it proper and effective.