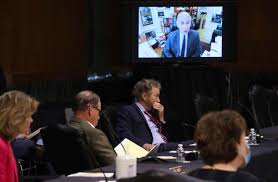 If "states or cities or regions" disregard the government's "checkpoints" on when it's safe to pull back from mitigation measures, Fauci said that "there is a real risk that you will trigger an outbreak that you might not be able to control, which, in fact, paradoxically, will set you back, not only leading to some suffering and death that could be avoided, but could even set you back on the road to trying to get economic recovery."

"We would almost turn the clock back, rather than going forward," he added, in testimony before the Senate Health Committee Tuesday on reopening the country and schools.

Fauci, who is a key member of the White House Coronavirus Task Force, also offered lawmakers an update on the development of a vaccine against COVID-19 during his first appearance before Congress since March. He provided an optimistic timeline for vaccine development and said there are at least eight vaccines in various stages of development.

"We have many candidates and hope to have multiple winners," he said. The NIH has been collaborating with "a number" of pharmaceutical companies. Fauci had initially predicted that it would take a year to 18 months to develop a vaccine but now says that the NIH trial "moved very quickly."