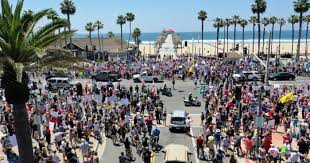 It's also a reason officials, aided by panicked corporate media headlines, put facts and data aside to target states that have chosen to reopen. The narrative being spun is to cast them as irresponsible and ignorant.

After Merkel's announcement, the reproduction number, or "R" (how many people an infected person passes the virus) rose above government targets to 1.0 last Monday, after dropping for weeks. A fear-driven corporate media and some health officials seized the information of evidence of a second wave.

But not so fast…

"The rise was little more than a statistical blip within normal fluctuation rates, according to Prof Lothar Wieler of Germany's Robert Koch Institute (RKI)…As if in confirmation, on Wednesday the R number fell to 0.75 —  its lowest level in more than a week — and it is now at 0.76."

Despite all the good news and favorable indicators, some U.S. governors are doubling down on their stay-at-home orders. This is testing the patience of The People as government leaders suggest a shutdown that will extend into late May, June, July and in some states, indefinitely.

In mid April, peaceful protests begin popping up in cities across America. There was escalating anger at the extended lockdowns and authoritarian policies of state governors. Plus crippling unemployment numbers – over 30 million jobless as of this week. The protests experienced a brief respite in anticipation, as shelter-in-place—what U.S. Attorney General William Barr called "disturbing close to house arrest" —order expirations approached.

Texas, Idaho, Alabama and Georgia allowed their stay-at-home orders to expire on April 30 against a headwind of corporate media venom. South Carolina, Florida, Kansas, Missouri announced they would be allowing orders to expire this week [Monday]. Several other states moved into a 'Safer-at-Home' phase which is essentially a relaxed version of the stay-at-home orders.

Then there were some states that didn't. Thus it turned out America's second wave came not from a virus, but in the form of larger public protests.

California protests exploded in the face of an obviously humiliated Gov. Newsom who, in a petulant move many are calling an overreach, closed Orange County state parks and beaches due to heavily publicized overcrowding.

But every action earns a reaction. Police estimate that between 2,500 and 3,000 people gathered near the popular pier in Huntington Beach on Friday to protest the decision. Police on horseback created a perimeter to contain the crowd

In response, the city council of Huntington Beach has voted to mount a legal challenge against embattled and increasingly angry Gov. Newsom, and the city of Dana Point is pursuing a temporary restraining order against both the vaccine-pushing governor and the state.

Simultaneously, at the state capital in Sacramento, another brushfire of protest broke out: 32 people arrested.

After launching the largest initial protest at Michigan state capital in Lansing against draconian Gov. Gretchen Whitmer weeks ago, state residents mirrored California's pushback in a second go round of protests. On Friday, the governor signed another executive order, terminating the old state of emergency and replacing it with a new one lasting through May 28.

President Trump, who tweeted 'LIBERATE MICHIGAN!' during its first round of mid-April protests again:

The Governor of Michigan should give a little, and put out the fire. These are very good people, but they are angry. They want their lives back again, safely! See them, talk to them, make a deal.

People are stupid. What would you do if your neighbor came over with his gun, got the drop on you, and held you hostage in your house for a couple of months? -0- The Governor and law enforcement are not immune to prosecution for their unlawful acts. What they might be immune to is the way you prosecute them. And I don't mean violence. What I mean is take them to common law court, man-to-man, for whatever kidnapping-style of act they did to you. Stick to the point. Don't let them run you around all over the place with their excuses. -0- We have freedom guaranteed by Amendment 1 to gather and to speak. The last thing to do is violence. And the only time to do it is if they won't allow the court to assemble. But either way, court or no court, get together with a bunch of friends who will back you wherever you are.