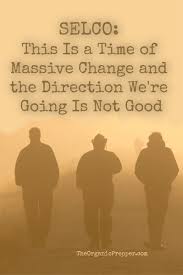 Where are we now?

We are living in a world where fear controls us, or is trying to control us. If we take out all the facts and guesses about the severity of this illness, all that left is fear, and we are being driven to act by that fear.

Among all the fears (fear for health, job, security…) the fear of the unknown ( future) is the greatest and most dangerous.

We as preppers should live and act by the premise of an unknown future.

But when that premise goes worldwide and when common people start to fear from an unknown future, the whole picture can be different.

This whole situation could go in many different directions, but the most probable direction where it will go is not nice. We might be living in times of massive changes.

The individual is nothing

In the name of health, safety, and security, an individual person becomes irrelevant. You or me alone are irrelevant if we are portrayed as, for example, a health hazard or risk for the community. Our rights basically cease to exist.

If you are portrayed as, let's say, a terrorist, your rights no longer exist.

Not only will you lose your rights, but you will be publicly portrayed as a threat. You will be described in a way that your own neighbors will hunt you down like a rabid animal and then turn you in if you survive.

But the point here is who decides who is terrorist or a health risk, and who controls the people who make those decisions.

We are living in times when all that gets blurred together and rushed in the name of security. Or in this latest situation, in the name of public health.

I have seen people get quarantined for 28 days in tents without proper food, hygiene, or anything similar just because someone told authorities they are suspicious and may have the virus. People being separated from their families based on an assumption made from some guy who does not know sh*t about medicine and then being put into those tents for weeks.