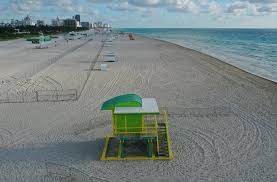 After the season's first heatwave last weekend and tens of thousands, if not hundreds of thousands of people flocked to beaches in Southern California, ignoring social distancing rules, Gov. Gavin Newsom is expected to close all state beaches and parks starting Friday, according to a memo first seen by CNN.

"We wanted to give all of our members a heads up about this in order to provide time for you to plan for any situations you might expect as a result, knowing each community has its own dynamics," the memo reads.

The closure could be announced as soon as Thursday, and state park officials, along with local law enforcement, will support efforts to close the sites, the memo adds.

The memo comes as overcrowded beaches were seen in Orange County and Ventura County last weekend as residents poured onto the coast looking for relief from the heatwave.

"This virus doesn't take the weekends off. This virus doesn't go home. We have to manage and augment our behavior," he said. "The only thing that will set us back is people stopping practicing physical distancing."

At one point, estimates showed at least 90,000 beachgoers flocked to Newport Beach in Orange County.