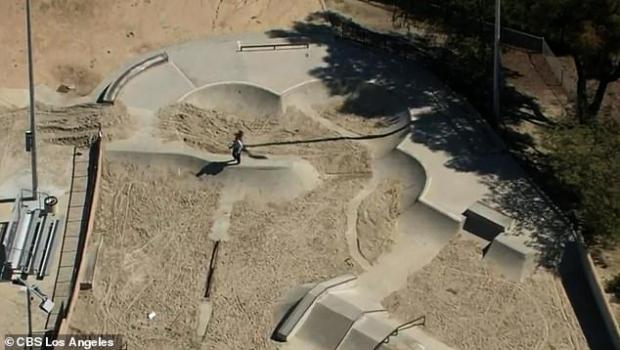 Skateboarders hoping to kick-flip their way through the coronavirus pandemic in a Southern California city were delivered a shock this week when they arrived at their local skate park to find it had been covered with 37 tons of sand.

Officials in San Clemente officially closed its parks and recreational facilities on April 1 as part of the state's stay at home orders to help stop the spread of COVID-19.

However, in the two weeks that followed, officials received numerous complaints that large groups of people were still continuing to gather at Ralph's Skate Court - ignoring the number of 'No Trespassing' signs displayed at the park's entrance and disregarding the state's social distancing guidelines.

Taking a hard-line stance, officials finally decided to draw a line in the sand - literally - on April 13, dumping 37 tons of the granular substance over the park's bowls and ramps.

'On April 1, we kind of let it play out to see if users would abide by the closure,' Samantha Wylie, San Clemente's recreation manager for the Beaches, Parks and Recreation Department, told the San Clemente Times.