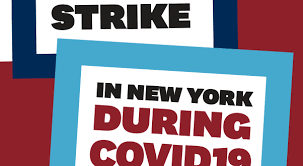 The wealth inequality story is not a complicated one to figure out. In essence, tens of millions of Americans were already suffering from insurmountable debts, no savings, and low wage jobs, even before the pandemic unfolded and crashed the economy.

Now the working-class poor are starting to get angry, sitting on their couches in quarantine, as they have recently been laid off, only to watch President Trump at afternoon press briefings tout about his epic bailouts of corporate America and Wall Street, while everyone else gets a lousy $1,200 check.

A "social bomb" is brewing in America – we've been documenting how the next crisis could be a social one. The bottom 90% of Americans are getting smarter by the day as they sit in lockdown, now organizing on the internet, and are plotting their very next big move that could be severely disruptive: rent strikes.

New York City housing activists are preparing to unleash a "massive wave" of rent strikes in the next two weeks, reported Bloomberg.

Housing Justice For All hopes to have as many as one million New Yorkers on May 1 participate in a rent strike to pressure Gov. Andrew Cuomo to cancel rent for the duration of the lockdown.