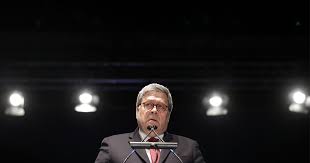 Months after President Donald Trump promised to open FBI files to help families of the 9/11 victims in a civil lawsuit against the Saudi government, the Justice Department has doubled down on its claim that the information is a state secret.

In a series of filings just before a midnight court deadline on Monday, the attorney general, William Barr; the acting director of national intelligence, Richard Grenell; and other senior officials insisted to a federal judge in the civil case that further disclosures about Saudi connections to the 9/11 plot would imperil national security.

But the administration insisted in court filings that even its justification for that secrecy needed to remain secret. Four statements to the court by FBI and Justice Department officials were filed under seal so they could not be seen by the public. An additional five, including one from the CIA, were shared only with the judge and cannot be read even by the plaintiffs' lawyers.

Barr insisted to the court that public discussion of the issue "would reveal information that could cause the very harms my assertion of the state secrets privilege is intended to prevent."

What the various security agencies are trying to hide remains a mystery.