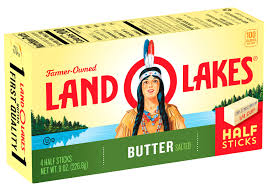 Land O'Lakes has removed the 'racist' image of a Native American woman named Mia from its packaging after nearly 100 years.

The Minnesota-based company, which was founded in 1921, quietly unveiled its new packaging in a press statement released published in February.

One of the images from the press release shows the old design has been replaced with a landscape.

According to the farmer-owned cooperative, which produces cheese, butter and other dairy products, the new design will feature 'the farmers who are the foundation of the cooperative's membership'.

'The new packaging will show up in a variety of ways, including through a new front-of-package design that features the phrase 'Farmer-Owned' above the LAND O LAKES brandmark, 'Since 1921' below it and a vibrant illustration of land and lakes,' the company said.

Though there was no mention of removing the Native American image from their packaging, Beth Ford, President and CEO, Land O'Lakes said: 'As Land O'Lakes looks toward our 100th anniversary, we've recognized we need packaging that reflects the foundation and heart of our company culture.'